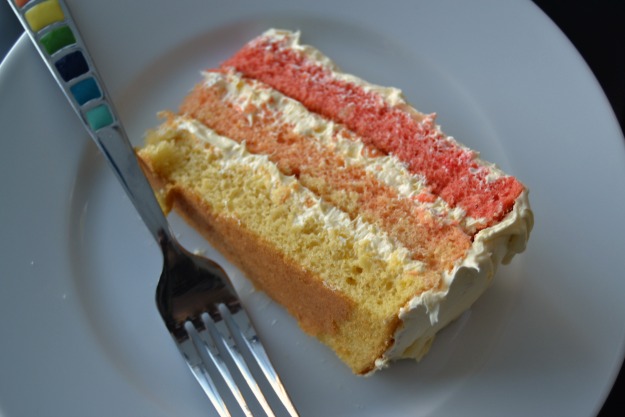 The first time I tried to make an ombré layer cake, like the one seen here on Yammie’s Noshery, it was an utter disaster. Well okay, I cheated and used a box cake so it tasted fine, but the ombré effect didn’t really work, I was rushing and didn’t let the layers completely cool, and I didn’t level the layers so everything ended up being a gigantic, crumbly, and gloopy mess. Again, it tasted good (I mean, when do cake and icing not taste delicious?), but it was certainly nothing to blog about!

For our extended Valentine’s Day celebrations, however, I decided it was finally time to try again. And the results, while still not perfect, were a thousand times better than my initial attempt!

Layers – Having learned some valuable lessons the first time around, I decided to do three layers instead of five, since that seemed a little more manageable stacking-wise. I also figured it would let the ombré effect show a little more since on my first go-around, the colors really stopped showing any variation after the third layer.

Though the three layers worked out just fine, the cake seemed a little short to me so I think next time, four might be the perfect balance.

Colors – While Yammie’s cake was pink for a bridal shower, and I’ve seen a wintery blue cake by Emily Schuman over at Cupcakes and Cashmere, my original color scheme was yellow. I was making the cake in April and thought yellow would make it a little more Spring-y. But much to my dismay, while the batter had all been different shades of yellow, each layer came out of the oven looking the same. If you looked closely, you could see a slight difference in the layers, but for the most part, it resembled a generic yellow cake.

This time, I was going to do a red, pink, and white effect for Valentine’s Day, but – being the non-traditionalists that we are – C said he wanted red, orange, and yellow instead. While I would have still liked the colors to be a little brighter (I think I’m going to try gel colors next time), the ombré effect is definitely visible!

Finishing – After my first depressing attempt at the cake, I went to Sur La Table and bought a cake leveler. I’m not usually one to get extra kitchen accessories (Why do you need a cake tester when a knife works just fine?), but I knew that if I wanted my next attempt to be any better, the uneven layers were a major pitfall I needed to address. As this is only the second cake I’ve made in this apartment, I’m still learning how this oven works, meaning everything still came out a bit lopsided. But the leveler was a life saver! Plus, we can now make cake balls/pops with the leftover tops!

Finally, while I did let the layers cool a little more than last time, I probably should have let them go a little longer – maybe overnight – since they were still a bit crumbly when I tried to ice the cake. That said, as it was nowhere near as bad as last time, I’ll still take it for the win!