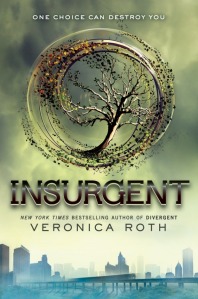 After being pleasantly surprised by the film version of Divergent, I had somewhat high hopes for Insurgent, the second book in Veronica Roth’s post-apocalyptic young adult series. While I certainly had a number of issues with the first novel, they weren’t things that a good editor couldn’t fix. Sadly though, none of them were addressed, and I found the sequel to be just as maddening at times as the book that preceded it.

First of all, my problems with Tris herself and her relationship with Four, aka Tobias, continued, and may have actually gotten worse. I have never been in a war zone and can’t even begin to imagine how I would react in some of the scenarios that Roth’s protagonist finds herself in, but I have to agree with the other characters who found Tris to be “erratic.” She seemed to do things without really thinking them through, or about how her decisions would affect the people around her. Yes, she did seem to be extremely conflicted about everything – which I understand – but all of the mental back-and-forth was once again exhausting.

I also really didn’t like Tris’s budding romance with Four. Reading through their scenes together, it felt like Roth was trying to make them have this epic love story, but there is so much anger, fear, and betrayal between them that I found myself being a fuddy duddy and thinking: “What on earth is this telling young girls about relationships?!” While I certainly know that passionate relationships can have really high highs and really low lows (been there, done that!), I just don’t think good, healthy relationships should be that difficult.

The other issues I had with Insurgent were more focused on time and location. I never had a good sense when reading the book of exactly how much time had passed between the simulation that closed out Divergent, and all of the different battles that came next. Occasionally Tris would indicate that a week or a few days had passed, but other than that, I have no sense of how quickly things are moving in the fictional world Roth has created.

Compounding this confusion about time was just trying to figure out where everything was located in relation to everything else. Some times the faction headquarters seemed to be far apart and at other points in the story they seemed to be right on top of each other. Maybe it’s easier to understand if you’re from Chicago, where the story is set, but I had a really hard time picturing everything in my head and keeping things straight.

Though Insurgent was certainly not what I was expecting, the one thing I will give Roth, however, is the way the story ends. I’m not going to reveal any spoilers, but the conclusion included a plot twist that I didn’t see coming – one that prompted me to immediately download Allegiant, the third book in the series, the next morning.

So far the series has left me with mixed emotions – I don’t necessarily like the books themselves, but I can’t quite put them down either. I’m just not sure if that’s because I’m hooked to the story, or if it’s because I’m hoping that next time, it will be better.