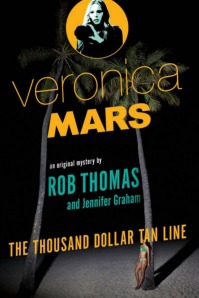 While I have been desperately trying to finish Veronica Roth’s Divergent trilogy, I’ve been having a devil of a time getting through Allegiant, the final book in the series. It’s been such a struggle that I needed a quick break from it, and when I saw a copy of Veronica Mars: The Thousand-Dollar Tan Line at my local Barnes&Noble, I knew I had found the perfect distraction!

Having been a backer of the Veronica Mars movie, and a devotee of the television show, I was pretty confident that I would like the book, but it was way more fun than even I expected!

Like all of Marvel’s Avengers films and the television show Agents of S.H.I.E.L.D., The Thousand-Dollar Tan Line picks up where the Kickstarter movie leaves off. However, co-authors Rob Thomas and Jennifer Graham do a good job of explaining the backstories and Veronica’s history with the different characters so seeing the show or watching the film is not a prerequisite for reading the novel. Of course it doesn’t hurt, but it’s not necessary.

Though the story had everything I’ve come to expect from Veronica Mars – dry, sarcastic banter, class tensions, and seedy characters – it was all of the different twists that kept me hooked. Just when I thought I knew where things were going, the tale would switch directions. There was even a surprise appearance from an old character, and some closure (for both Veronica and me), which I never expected. And though I had some idea towards the end about whodunit, there was a plot twist I definitely didn’t see coming!

It took me about six hours total to read the book from cover to cover, so The Thousand-Dollar Tan Line is certainly a quick read, but it’s one that is perfect for the beach or a quiet afternoon curled up on a couch!