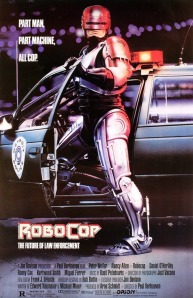 When José Padilha’s remake of Paul Verhoeven’s RoboCop came out earlier this year, I was super excited to see it. It looked sharp and sleek, and just like everything I could want from a man-turned-cyborg action film. Plus, I enjoyed Joel Kinnaman in AMC’s The Killing and was eager to see him in a lead role.

Complicating things though was the fact that I hadn’t actually seen the 1987 original, and I felt that I needed to check that one out first. Yet before I knew it, the film was no longer playing at any of our local theaters. Luckily for me, we stumbled across a Peter Weller night (Leviathan was playing before and after RoboCop) a few weeks ago on television. We then saw that the Kinnaman version was available to rent on demand, so we made that our date night movie one Friday, enabling me to see both films in fairly quick succession.

So which RoboCop came out on top in my view? I’m know I’m going out on a limb here, especially since most of the professional film reviewers out there felt differently than I did, but I actually liked the remake better. I mean Verhoeven’s version was good, but the special effects were fairly obvious to my eyes so it was hard to suspend my disbelief and I was very aware I was watching a movie. I guess I’ve just been ruined by today’s CGI masters (though I still think the effects in the original Star Wars are ridiculously good).

I also had a hard time seeing Weller’s Alex Murphy as a sympathetic character. Sure, he’s a good cop fighting corruption within his local precinct, and yes he’s turned into a cyborg against his wishes (or I guess it’s more without being asked since he’s, you know, dead), but his robotic demeanor just came across as flat to me. I totally understand that that affectation was likely what Verhoeven was going for and it makes sense in a cinematic satire questioning corporate power, privatization, and taking humans out of the loop. I just never found myself as convinced as Murphy’s partner Lewis that “he” was somehow still in there amidst all of the widgets.

Padilha’s take on Murphy’s transformation is a bit more developed – with the audience seeing the former Detroit cop’s horror at what he’s become; his struggle to adjust to overwhelming amounts of data being directly uploaded to his brain, as well as the weight of constantly knowing just how awful people can be to each other; and the re-emergence of his soul/consciousness after OmniCorp’s technicians have turned off all of his emotions. Padilha questioned many of the same things Verhoeven did, but as a child of the 1990s, I found myself relating more to his modern social commentary.

Though I didn’t fully agree with the review from Ann Hornaday, the Washington Post’s film critic, I did like her comparison of the two films:

“The original ‘RoboCop’ was so good, in fact, that it counts as one of those films that doesn’t need to be remade; on the other hand, at a time when so many of the futuristic realities it posited have come to pass in the form of prosthetics, drones and surveillance technology, it couldn’t be a better time to revisit and recast the film’s cardinal themes. Like Bob Dylan, James Bond and ‘Tonight Show’ hosts, perhaps every era should get the ‘RoboCop’ it deserves.”