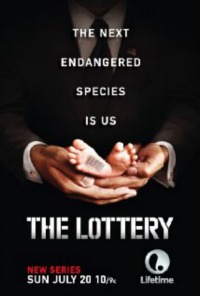 Warning: There are some spoilers in this, so proceed at your own risk!

Nearly ten months after I started posting my Geeky Musings on a fairly regular basis, I still stand by most of my reviews. I’ve seen several of the movies a few times over, my thoughts on the books haven’t really changed, and most of the television shows I’ve checked out have been established favorites. However, I am human and every now and then, I can get something wrong.

A perfect case in point is Lifetime’s The Lottery, which completed its first season Sunday night. When I first reviewed the show back in August, I was a bit hung up on the whole conceit of the series. The advertisements I had seen made it seem like there was a definite agenda to the plot – i.e., all women should want to be mothers and have babies to keep our species alive – and it was not one I was really on board with. Three episodes in, I was intrigued, but not totally sold on the storyline.

Having now watched the show for a full season though, all I can say is “Wha?!!!?!!” There is so much subterfuge going on in The Lottery, it is ridiculous, and it truly has been one heck of a thriller.

But first, here’s a quick recap. It is 2025 – five years after the last human birth. No one really knows why women have stopped bearing children, but an American doctor trying to figure it out is able to fertilize 100 human embryos. Once her breakthrough is discovered, the U.S. government gets involved and decides to hold a national lottery to determine who will carry the embryos to term. And, as the show’s site says, the battle for control begins.

That battle is being waged by a variety of people. You have the Department of Humanity working with the U.S. military for seemingly nefarious reasons, and there is clearly a history between the characters, but you’re not entirely sure what that is. Alison Lennon, the fertilization doctor, thinks the Department of Humanity is responsible for the crisis, and it’s leader may have had a role to play, but a surprising plot twist near the end of the first season suggests there is more to this than she/we all thought.

Then you have the First Lady, who is ineligible for the lottery but desperate for a child, rigging the system for one contestant in an effort to convince her to hand over the baby, should she be selected by the people to become a mother.

And finally, you have the Vice President working with the heads of the Department of Humanity and the military to assassinate the President, who no longer seems to be playing ball with whatever end goal they have in mind.

There are, of course, a number of other story lines (and plot twists!) as well, but these are the big three, and ones that I honestly never saw coming when the show started.

While I still agree with Hank Stuever, the Washington Post’s television critic, that you should give new television shows about three episodes to find their feet, The Lottery is a clear example of why some smart shows deserve a little more time.