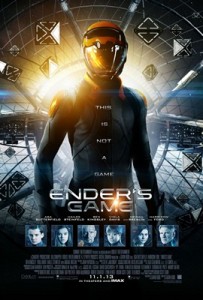 An embarrassingly long time ago, the movie version of Ender’s Game aired on television. Since I hadn’t read the book yet, I recorded it, so I could review things in their proper order. Having finished the book this past weekend, I tucked into the film as I soon as I could on Tuesday night!

For me, the movie began on a high note because the cinematography was just stunning. The colors were extremely rich and deep space looked so serene and peaceful, despite the fact that it was being used to train kids for war. But after the opening scenes, the whole thing turned for me, and not in a good way.

First of all, there were a TON of discrepancies between the movie and the book. From the way Ender seems to make friends to the students in his Dragon Army to those who are with him during the final simulations, everything was a bit off.
To be fair, the changes likely weren’t enough to bother the lay watcher, but having just read the book, they had me constantly yelling “Wrong!” at my television.

While those changes seemed fairly unnecessary to me, the biggest problem I had with the 2013 cinematic take on Orson Scott Card’s novel was its length. While many movies these days could likely lose a few minutes, Ender’s Game would have benefited greatly from having a few more. The movie itself is just a little under two hours, and within those 114 minutes director Gavin Hood has to get Ender from Earth to the Battle School, moved up through the various student armies training for war, back home for a brief respite, up to Command School to finish his training, and then in command of the International Fleet. He does it, but much of what made the book so good is lost along the way.

We don’t see, for instance, Ender’s brilliance as a strategist or really the ease with which his army dispatches all of the others. We don’t get a sense of how much the fleet commanders are pushing him, or even why they think he’s so special. We also don’t get to see much of the family dynamic, with Ender’s brother Peter on one side as his tormentor and his sister Valentine on the other as his savior. They are certainly there on screen, but those bonds aren’t given any time to develop. Really, none of the ties are allowed much air time, making it harder to understand the deep levels of loyalty and trust that exist between Ender and his soldiers; which is a shame, since that makes up the majority of the book.

All in all, Ender’s Game (the film version) wasn’t as bad as some movies I’ve seen, but it could have been much better than it was.