My humble Geeky Musings turned 2 last Friday and instead of celebrating with sweets, like I did last year, I decided to read my very first comic book! Though my mother collected graphic novels when she was younger, this was my first foray into anything besides the Archie comics I used to get at the grocery store.

I picked up my comic last year on my birthday, when my family and I went to Charlottesville, Virginia. There was an open-air market in the center of the city and one of the vendors had an impressive array of comics. I was initially drawn to the complete Age of Apocalypse series (having just seen X-Men: Days of Future Past), but opted for 1979’s What If #14 – What If Sgt. Fury Had Fought World War II in Outer Space – instead. The title was just too ridiculous to pass up! 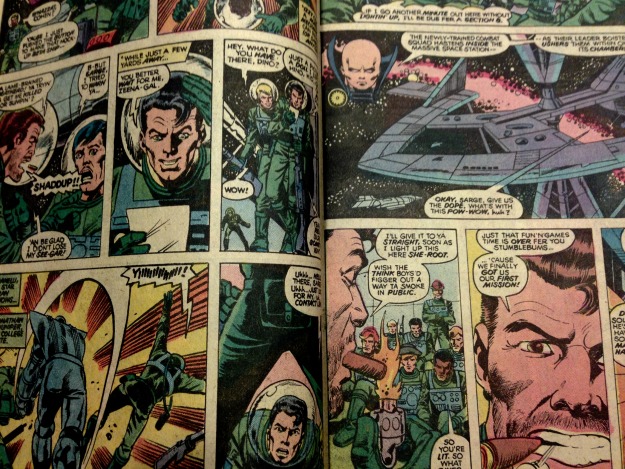 Though I have become a Marvel fan in the last year or so, I must admit, I found this story a little lacking. First of all, just about every line reeked of machismo. I’m sure it appropriately reflected the zeitgeist of the times, but in 2015, the name-calling and slang wore real thin, real fast. Also, the narrator – a character named “The Watcher” – reminded the reader just about every other page that the space battle was happening in a parallel universe, but at the same time as Pearl Harbor. After the first reference, I got it.

But while the actual text of the comic didn’t quite blow me away, I was excited – after finally watching PBS’s Superheroes documentary – to be expanding my geekynerdy repertoire once again. For all of the movies that I have come to love and the mythologies I am continuing to learn started in comic books.