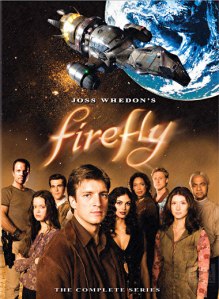 Though I don’t remember seeing or hearing anything about Joss Whedon’s Firefly when it first aired in 2002 (I was likely still mourning the loss of Roswell), I have heard rumblings about the science-fiction television show, the film Serenity, and Browncoats over the years. I became even more acutely aware of it two years ago when the successful Veronica Mars Kickstarter (of which I was a backer) prompted questions of whether or not that would be a viable option to bring the ‘verse back to the big screen. And of course I knew the show introduced much of the world to a lovely man known as Nathan Fillion.

As such, I assumed that I would eventually check out the series, but stumbling across Serenity on television at the same time that Firefly showed up in my Netflix queue seemed like a sign. So, I set out to watch the show, saving the movie for after that was done and I was caught up on everything.

Now, if you’ve never seen or heard of Firefly, here’s quick summary. Five hundred years into the future, the Earth has been used up and a galaxy of other planets has been terra-formed for human survival. As is want to happen in the world, some planets are wealthy and others are not, and people do what they have to in order to survive. The crew of the Serenity, a Firefly-class spaceship, is a mismatched group of travelers and the show tracks their adventures as they fly through the universe, evading agents from the ruling Alliance and competing factions as they work to earn a living.

Once the pilot started playing, I was struck by the fact that there were only 13 other episodes in the series. While I knew that Firefly had been cancelled quickly, I didn’t realize that it had been gone that fast! Having seen some of my own television favorites come and go too soon, I immediately understood the passion and devotions of the fans.

Yet while I completely got their enthusiasm for the show, I’ll admit that it took me a little time to get into Firefly. First of all, the show jumps right into the action without much exposition, so I didn’t quite understand the set-up until Episode 2. Without the beginning voice-over, it’s not clear who everyone is, how far into the future we are, or even what universe we are in.

The chemistry between the characters themselves was also a bit stilted at times which, while natural given that most of these people are strangers and a bit suspicious of others, made it hard for me to relate to anyone right away. Take Fillion’s Captain Malcolm Reynolds, for instance. I didn’t really warm up to him until Episode 9, when it became much clearer how deeply he cared for the people on his ship – especially the newcomers.

It is safe to say that I am not quite a Browncoat, but I do wish creator Joss Whedon had been given a little more time to tell his space western tale. When Firefly ended, several relationships between the crew members were changing, and I would have loved knowing where they were going. It was also clear that something quite traumatic happened to River Tam, one of the passengers, but we never learned the exact reason why. Though hopefully that’s what Serenity is for!