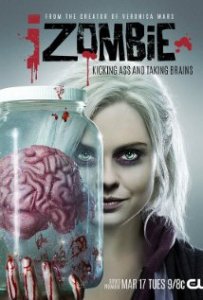 I first heard of iZombie a couple of years ago, when executive producer Rob Thomas mentioned his work on the new show in one of the many Veronica Mars Kickstarter update emails he sent to us backers. Since I’ve never been a big fan of zombie stories, I wasn’t entirely sure I would check it out, but the previews looked intriguing and as a Mars devotee, I figured it deserved a look.

Though I normally wait at least three episodes before reviewing a show (only two have aired so far), I figured I would make an exception for iZombie, partially because doing so would make this a Thomas week on the blog (I reviewed his latest Mars novel on Monday) and partially because I completely fell in love with the show!

iZombie – which is loosely based on a graphic novel written by Chris Roberson and Michael Allread – tells the story of Olivia “Liv” Moore, a promising young medical student who turns into a zombie after being attacked at a party. In the five months since the attack, Liv has learned that if she consumes a regular diet of brains, she won’t become a (typical) mindless zombie. To maintain her supply, she has started working at the local morgue, eating small portions of brain from the deceased on her slab. These nibbles enable Liv to experience the feelings and memories of the dead, which she in turn uses to help a local police officer solve crimes (he thinks she’s a psychic).

Since the show was developed by Thomas, along with Diane Ruggiero-Wright, and features a spunky blonde-ish female lead, it is impossible to not compare it to Veronica Mars. And if you were a Marshmallow, it is quite likely you will become an iZombie fan as well.

For starters, it has many of the same qualities that made Veronica Mars such a favorite. There’s a strong central female character that is both tough and tender, with a certain amount of snark. Liv’s ex-fiance, Major, resembles Veronica’s main love interest, Logan, in looks and sense of humor, yet he doesn’t seem to have the same tragic past. iZombie is also a crime procedural, with an overarching mystery. In this case, it’s trying to figure out how this version of the zombie apocalypse (zombieism?) started and how many others might be out there.

Yet for all of the similarities between the two shows, there are some key differences as well. For starters, Liv’s boss – the medical examiner, knows she’s a zombie and is absolutely fascinated by the prospect of studying her, and potentially finding a cure for her condition. While Veronica’s friends eventually figured out her dark secret – that she had been raped at a party her sophomore year of high school and that she was secretly investigating her best friend’s murder – that didn’t come until later in Season 1. In Liv’s case, it happens in the first eight minutes of Episode 1!

Also, while Veronica often felt like she was suffering through the injustices of high school and the fictional Neptune, California alone, she did have a cadre of friends/associates who had her back. Liv, on the other hand, is predominantly alone – with her family and friends, most notably her roommate, giving her a hard time about the changes they’ve noticed since she became a member of the living dead (they think it’s just PTSD). I understand that their concern comes from a place of love, but it is a bit frustrating, for both Liv and the audience (I mean really, how many times do you need to hear people telling you that you’re screwing up your life?!).

Like Veronica Mars, iZombie has its darker moments, there are also flashes of light – most often exposition that comes in the form of a voiceover by Liv. These internal monologues provide us with the episode’s lesson, for a lack of a better word, which more often than not is positive. For instance, at the end of the pilot, Liv says:

Life’s short and then you die. And then, then you have to make some decisions. You can skulk around lamenting all that you’ve lost, try to keep yourself numb and isolated, or you can embrace who you are… I wanted to do something with my life. I wanted to help people. Not necessarily as a zombie psychic who eats murder victim brains, but still… I’ve spent five months bemoaning all that was taken from me. It never occurred to me that I’d have something to give; a way to contribute. A reason for being not alive.

It’s a good reminder to stay flexible and adjust to the curveballs life throws at you, regardless of what you eat for dinner.