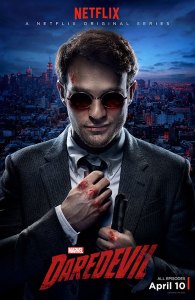 When the Mysterious Mr. C and I remembered that Marvel’s Daredevil was being released on Netflix last Friday, we joked with each other that we knew what we were binge-watching over the weekend, but I don’t think either one of us really thought that we would sit down and watch all 13 episodes in one day! (Note: It was not one sitting as there was a brief pause between Episodes 3 and 4, so we could finish cleaning the apartment.) And yet, that is exactly what we did!

Since I haven’t seen the 2003 film version of Daredevil, I asked C if he wanted to write a review of the show instead. He responded with: “Why?” After I explained that it was because he could better compare the two, he simply chuckled and said: “Oh, there is no comparison!” Though I haven’t read too many other reviews about the show, I have a pretty good feeling that that is the general consensus so far.

Daredevil centers around Matthew Murdock, a blind New Yorker from Hell’s Kitchen who is a defense attorney by day and a masked vigilante by night. He practices law with his college roommate, Franklin (Foggy) Nelson, and their secretary, Karen Page, is a former client. While they take on a variety of different cases, most of them seem to lead back to one Wilson Fisk, a shadowy figure who has a number of police officers, judges, reporters, and at least one senator in his pocket. Season One of Netflix’s newest series focuses on Murdock’s evolution from the “Devil of Hell’s Kitchen” to the “Daredevil,” as well as his team’s fight against Fisk and his cronies.

I really don’t want to give any spoilers away, but I was repeatedly struck while watching the show on Saturday that television seems to be the right medium to tell such a story, primarily because it is so dark and so violent. You need to be able to sympathize with Murdock before he goes off and beats people to a bloody pulp, and thirteen hours of television (versus less than two hours in a theater) gives you time to understand what life is like for him, where he came from, and what motivates him.

The show’s creators also did a really good job of humanizing Fisk. To be sure, he is a pretty calculating SOB and is not happy when people stand in his way, but he has his own sad history that’s driving him forward and there are moments that we get to see some tenderness for those he holds most dear. As one of my friends commented on Facebook over the weekend, Fisk isn’t the Kingpin – one of the most powerful and most feared crime lords in the Marvel Universe – just yet, but you end the show curious to see his transformation and what comes next.

Like most of the other Marvel productions that have come out since the creation of the company’s “Studios” branch in the early 1990s, Daredevil has that perfect blend of realistic human characters – both heroic and villainous – dark times with a touch of hope, and a certain dash of humor. Stan Lee’s enterprise has truly figured out the alchemy of bringing its comic books to life, while grounding them in reality. It’s a powerful combination that holds true, regardless of screen size.