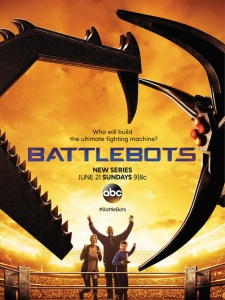 The Mysterious Mr. C and I have been pretty good at going through all of the season finales that we had saved on our DVR (though we still have to watch the final two episodes of iZombie), and as such, I was starting to wonder what would be on our schedule this summer! To be sure, we could probably stand to watch a little less television (couldn’t we all?!), but it’s still nice to have some go-to shows that you look forward to seeing each week.

Last night, as I perused our upcoming recordings, I realized that I didn’t need to be that worried! American Ninja Warrior has returned on NBC and Under the Dome is premiering on CBS tonight. But in addition to these old standbys, there are two newcomers in our rotation as well: Mr. Robot on USA, which aired yesterday evening, and BattleBots on ABC, which has taken over the 9 pm time slot on Sunday night.

Okay, okay, BattleBots previously aired on Comedy Central, but it has been off the air since 2002, and this is the first time it is being shown on one of the three major networks. It is also the first time that I have seen it (C says he watched the original “back in the day”), and it sounds like ABC has really revamped the show, so I’m counting it as new!

If you aren’t familiar with the series, it is exactly what the title suggests: 24 homemade robots battling against each other in an elimination tournament until one machine stands victorious. It’s a super simple premise and though it is slightly absurd, it is AWESOME!

Since I haven’t seen the previous seasons of BattleBots, I have no idea how this championship compares to past tournaments, but Kill Screen’s Matt Margini suggests that the reboot is a more adult version of its previous incarnation – “a serious form of competition that does not exclude people on the basis of anatomy, explicitly rewards creativity and innovation, and manages to satisfy the audience’s desire for gladiatorial carnage.” This is all true, though I will admit, it is a little hard to see some of the robots get completely pulverized since you know a lot of time was spent putting them together.

And yet, as the New York Observer’s Vinnie Mancuso points out, BattleBots is so serious that it is also a bit silly, “surrounding the actual fights with so much insane hyperbole and grandstanding that you can’t help but feel like you’re about to watch a competition with the fate of the damn universe hanging in the balance.”

Having seen Sunday’s premiere, I can attest to the fact that the commentary is a bit ridiculous, but the show’s hype machine is so good that you can’t help getting caught up in the competition and rooting for the robots to do some damage to each other. Mindful television this is not, but it sure is a great way to pass an hour!