Good morning my geeky friends, and welcome to the first “Nerd Alert” of 2016!! While I had intended on saving any Star Wars: The Force Awakens-related links for next week – which is going to be focused on that galaxy far, far away – there were just too many good things that I simply had to share! Please note, however, that since most of the following entries are fairly link-heavy, I’ve gone with five overall stories, as opposed to the usual six. Enjoy!!

1. Too often, social media can be a dark place filled with bigotry, misogyny, and all sorts of other nastiness. But every now and then, there comes an epic Twitter feud between two Star Wars parody accounts that reminds you of the kind of fun that can be had on the Interwebs!

While I found the Twitter accounts of Emo Kylo Ren (@KyloR3n) and Very Lonely Luke (@VeryLonelyLuke) shortly after they first appeared and loved them both in their own right, when I discovered on Thursday that they had gotten into a large feud, trading jabs back and forth, I delightedly followed along and wished that I could be half as clever as the people behind the tweets. The opening shot was fired by Luke, but Kylo got in the last word, which was simply: “Oops.”

2. As I have mentioned before, I seem to have an inverse reaction to films as the paid movie critics out there – they typically hate the things that I love and love the things that I strongly dislike. And while I certainly recognize the fact that no film is perfect and huge oversights should be called out, sometimes it feels like they’re nitpicking for the sake of nitpicking. Or it feels like we’ve watched two completely different movies.

Such is the case with filmmaker Matty Granger and Seth Abramson’s Huffington Post article, “40 Unforgivable Plot Holes in ‘Star Wars: The Force Awakens’.” Like Granger, I saw the article listed somewhere on Facebook, but unlike him, I kept right on moving because I didn’t want to have some critic ruin the joy I felt after watching the film. And while I admit that it is always good to get another perspective on something, after reading Granger’s epic takedown of the article, I’m glad I didn’t waste my time. Indeed, it sounds like Abramson didn’t really watch the movie or completely glossed over the fact that many of these “holes” will be explained in future books, films, and television shows.

However, in an effort to be somewhat fair to Abramson, I did a little more digging and found a follow-up article of 20 more plot holes (many of the nitpicking variety) and then an additional write-up claiming that there are no plot holes and that The Force Awakens is the best Star Wars film ever made. Confused? Yeah, me too. Maybe, like Granger suggests, these conflicting posts are simply a symptom of our click-bait era, but regardless, his essay is a brilliant, passionate critique of preconceived notions and the rise of “idiot journalism.”

3/4. Though the upcoming reboot of Ghostbusters didn’t make it onto my list of movie must-sees in 2016 (I firmly fall into the camp of people who think it didn’t need to be remade), I was extremely excited to see all of director Paul Feig’s tweets about merchandise related to the film, especially in light of the dearth of Rey figurines for The Force Awakens. With all of the studies showing that women are passionate geeks and nerds as well, I’m a little shocked that some people in Hollywood still don’t get it (and as a result, miss out on a huge marketing opportunity). Luckily, Feig does and it seems like whoever wants a female Ghostbuster action figure will get one.

It also seems like those #WheresBlackWidow and #WheresScarletWitch campaigns have started to pay off as the new line of Funko POP! Vinyl and Dorbz figures for Captain America: Civil War showcase Agent 13, Scarlet Witch, and Black Widow. To be sure, there will probably be more overall figures for the male characters, but I’ll still take this as a start! 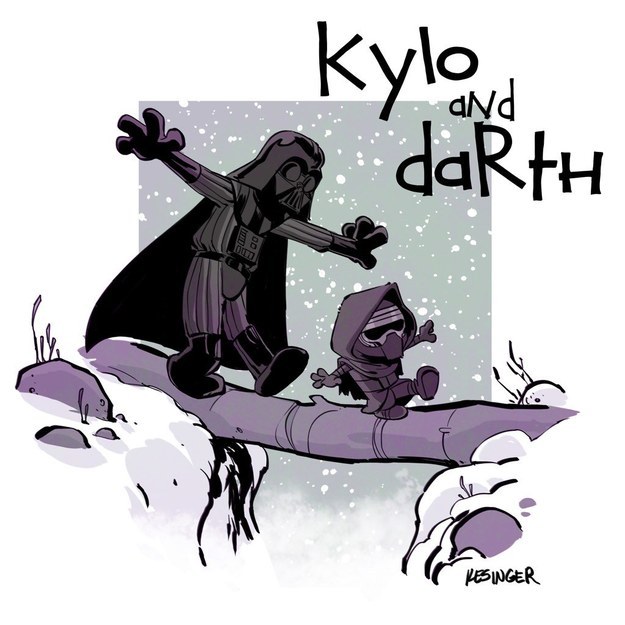 5. Growing up, Bill Watterson’s Calvin and Hobbes was the comic in our house. My parents had all of the compendiums and it was the first thing we always read on Sundays. In fact, we framed a comic for my dad one year that was the perfect representation of some of our mornings getting me ready for school and them off to work.

Because of that, it should come as no surprise that I absolutely love (and want to buy) all of Brian Kesinger’s Calvin and Hobbes and The Force Awakens mashups. Kesinger, an artist for both Walt Disney Animation Studios and Marvel Comics, has created six images so far, which he has shared on Instagram, though it is unclear how many he plans on doing. Personally, I hope it’s a lot as they are all complete perfection!