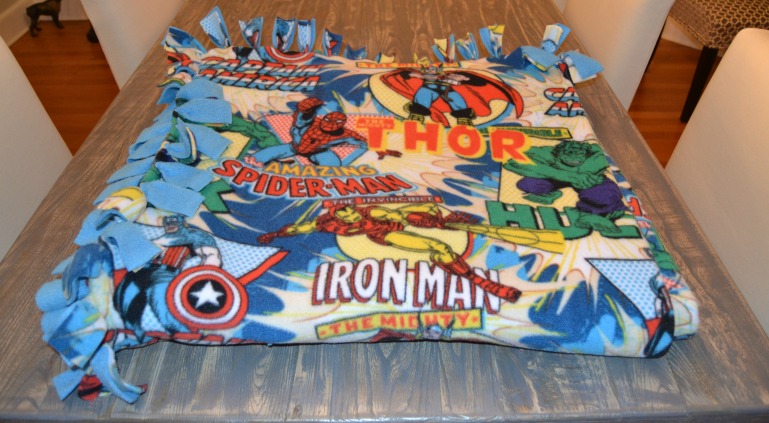 The Mysterious Mr. C and I already have more blankets than we know what to do with, but with the exception of a few collegiate Snuggies, most of them are of the monochromatic variety. So, when I heard that ABC was going to air a special commemorating Captain America’s 75th Anniversary (on this evening at 8:00 pm), I decided to make something fun to mark the occasion!

While my original intention had been to make a DC Comics/Marvel double-sided blanket, the DC fleece options weren’t that good, so I opted for a simple light blue fabric instead. I had also planned on tying the fringe into knots to keep the two sides of the blanket together, but then I found this ingenious pattern on Snapguide and went with it instead since it promised to not be so bulky. Cutting and threading the ties is a bit time consuming – it took me about 3 hours from start to finish – but I am so happy with how this blanket turned out! And since C and I watch a lot of Marvel franchises from the comfort of our couch, I’m sure it will get a lot of use!

As with all sewing projects, this one starts with trimming the fabric, first of any unnecessary bits like this edging with all of the Marvel copyright information. Then, you have to make sure the two pieces of fleece are the same size. While you should hopefully only have to do this once, I found that the blue fleece kept stretching as I worked with it and had to re-trim it several times. 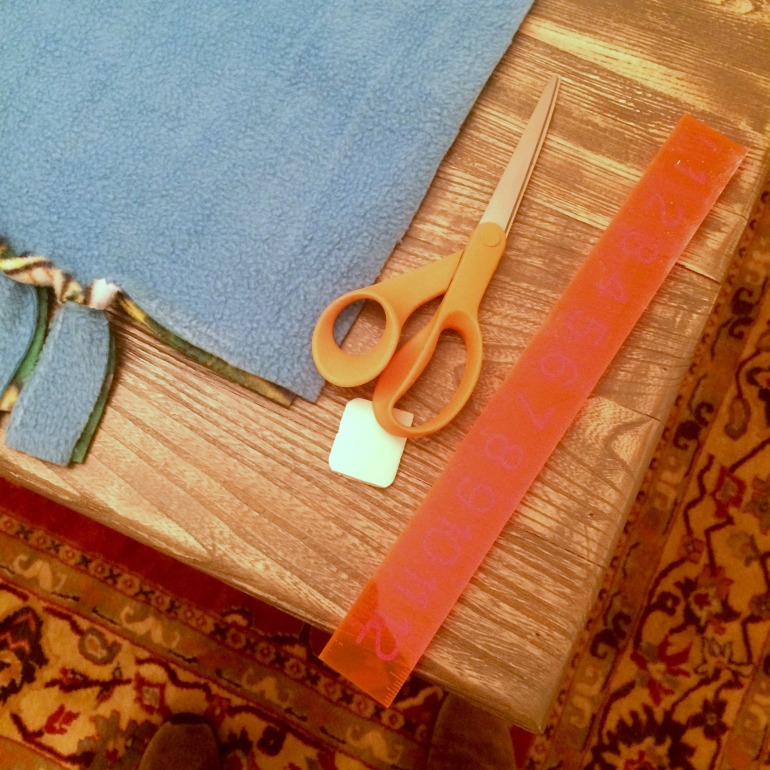 To mark and measure the cuts I needed to make for the fringe, I used the width of my ruler and tailor’s chalk. You could certainly use a blue or white marking pen as well, the chalk just happened to be the way I went.

Cutting and threading the ties was definitely the longest part of this project, but I eventually settled into a rhythm and things started to move a little quicker. However, you do want to be careful when you’re cutting the slits for the ties to feed through. There were a few that I made, particularly in the beginning, that were likely a little larger than they should have been, so those ties may come loose and need to be rethreaded as we use and wash the blanket.

Since C and I typically sit at opposite ends of the couch, I wanted to make sure this blanket was big enough to cover both of us, so I got three yards of both fabrics. Having that much fabric to work with was a little tricky, especially since I couldn’t lay it out flat all at once, but everything seemed to come out just fine!