Oh man readers, I don’t even know where to begin with this one. While, in theory, this Deadpool-inspired nail art seemed to be fairly simple to pull together, its execution turned into a comedy of errors over here at GeekyNerdy HQ. Since this is only my second attempt at drawing on such tiny canvases, I don’t really know what I expected, but it was ultimately a good reminder that I should make sure I have everything I need before getting started next time around!

Things first began to go awry when I couldn’t find the Sally Hansen nail art pens that I wanted to use to draw Deadpool’s iconic face/logo. As such, I decided that I would try my hand at using a dotting tool and thought a polka dot nail would be a fun addition to the other designs that I had planned.

Next, when I went to grab the various polishes that I wanted to use, I discovered that I no longer had a simple black option in my collection. That kind of surprised me since I typically gravitate toward darker colors, but I recently cleaned out my stash and must have thrown it out. The only blacks that I had in stock had touches of glitter in them, so I opted for the one with more of an orange hue.

Then, it took me a little while to figure out how to use the dotting tool and the red polish didn’t show up as clearly as I thought it would against the black (shocker, I know!). On top of that, the polka dot nails looked horrible, so the Mysterious Mr. C stepped in to remove the polish while everything else dried and I started again. In fact, the only designs that came out as I expected were the ones made with the striping tape!

Finally, while the top coat I used has a great sheen in real life, it has made taking pictures really difficult since it is always reflecting the light! Note to self: Don’t use a “diamond” finish next time!

Luckily, C and I were able to laugh over all of these trials and tribulations, and though it’s certainly not perfect, I’m actually pretty happy with the result! My freehand work definitely needs some improvement, but overall, I’m enjoying the more whimsical look that I ended up with. Hopefully the merc with a mouth would agree! 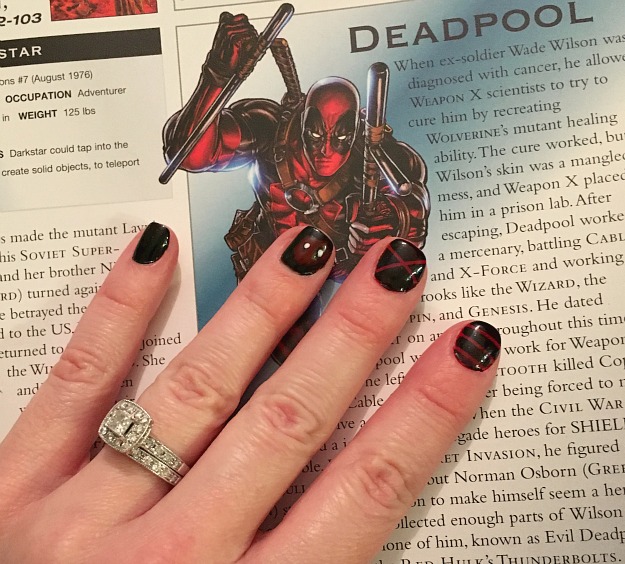 Colors Used: Sally Hansen Red My Lips and Midnight in NY, and Fingr’s Dots So Cool.