It has been a bit of a crazy week over here at GeekyNerdy HQ, what with me writing three posts in as many days, but it’s been a lot of fun too. Of course, it’s reminded me that I want to do a wholesale overhaul of the blog’s design, update my tagging structure, and all sorts of other behind-the-scenes fixes, so my weeks likely aren’t going to be slowing down any time soon. That said, it’s nice to feel the inspiration again and now that the sun is finally shining here in DC, I feel like anything is possible! Have a great weekend guys!

1. As a movie fan, I have always been amazed by the amount of choreography and coordination that goes into staging an action sequence, and I absolutely love it when there are video extras that show you how it’s done.

This time, the video showcases Captain America: Civil War and while you do see a lot of harnesses and green screen backgrounds, there is a lot of physical skill on display too. You also realize that the actors are doing a lot of their own stunts, which makes it easier to understand why stars Chris Evans and Robert Downey Jr. have talked about how much the Marvel Cinematic Universe has aged them!

2. Some of the things that I love the most about being a geekynerdy girl in the Internet Age are all of the fan mash-ups that we get. Sometimes they don’t work so well for me (like Disney princesses reimagined as Chewbacca), but sometimes (like in this Batman/Frozen mash-up) magic happens.

Such is the case with this video from Kurt Rauffer. In it, he combines two of film’s most famous opening sequences: those for the Star Wars and James Bond franchises. The result is an incredibly stylized version for Episode V: The Empire Strikes Back and it is really stunning. The video is a part of Rauffer’s student thesis at New York’s School for Visual Arts and I don’t know who his teacher is, but I hope he gets an A!

3. As I’ve mentioned before, I am a huge fan of transportation maps. Part of that is because I find the designs and colors to be fun and soothing, and another part is because I enjoy the memories that come flooding back when I look at stops I regularly took/take (such as the above image of Arlington, VA). And though I am still loving my newly arrived World Metro Map, I recently discovered these “Interstate Choreography” maps by Nicholas Rougeux (whose work inspired another set of maps that I enjoy) and want to add a few of his prints to my collection as well!

For these designs, Rougeux looked for complex interchanges of three or more roads – so-called “spaghetti junctions” – around the world. From there, he gave each road a different color to breathe “new life in to areas that are often avoided for their complexity.” As he notes on his website, “the results resemble everything from dancers to otherworldly creatures,” but they are all gorgeous! 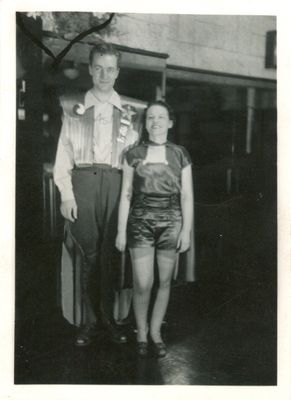 4. Though the Mysterious Mr. C and I have talked about various cosplay outfits for this year’s Awesome Con, we haven’t actually pulled the trigger on anything yet. But while cosplay may still be a little too intense for us at the moment, I am always in awe of the imagination and craftsmanship that cosplayers pour into their creations.

Since the con scene is still new to me, I thought that cosplay was a more modern phenomenon, but according to Racked’s Jennifer Culp, it can actually be traced back to 1939 (!!!) when Myrtle Rebecca Douglas Smith Gray Nolan (Morojo) crafted futuristic costumes for herself and love Forrest J. Ackerman to wear to the first-ever World Science Fiction Convention. As Culp notes, Morojo’s contributions have largely been forgotten, but her profile attempts to right that wrong and it is a fascinating look at a woman who was well ahead of her time.

5. I’ll be honest, when I first saw this video of Shanghai Disney Resort’s new Tron-inspired light cycle roller coaster on the Internet a few days ago, I was convinced that it would be my top share for this week. However, upon finally watching it in its entirety, I can’t help feeling like the people behind the ride missed a huge opportunity because to me, this seems like a perfect set-up for a racing roller coaster! After all, there are blue and red light cycles that race each other in both Tron and Tron: Legacy, and racing coasters always add a bit more excitement to the ride as you try to will your cars to come in first.

That said, the new coaster still looks cool and since I doubt I’ll be making it to Shanghai any time soon, I appreciate being able to see what the ride is like. I just wished they had taken the design up a notch.