As you may or may not have noticed, the nerd world celebrated Wonder Woman’s 75th birthday yesterday. While this is technically incorrect (she didn’t appear in comic books until December 1941), the celebration was tied to her appointment as an honorary U.N. ambassador for the empowerment of women and girls. Unsurprisingly, the move sparked a backlash, proving that William Moulton Marston’s superheroine is as controversial as ever.

Though I certainly understand the reasons for the criticism, as a recent Wonder Woman convert, I still wanted this week’s “Nerd Alert” to honor Princess Diana of Themiscyra. As such, all of the links below are Wonder Woman-related. Enjoy!

1/2. Jessica Chobot, the host of Nerdist News, is a huge fan of Wonder Woman and has, on occasion, worn a necklace featuring her logo on the show. When I asked her (on Instagram) where she got it, she mentioned that it was a purchase from San Diego Comic Con a number of years ago, but that I might be able to find one like it on Ebay or Etsy. Well, I looked and I found this gorgeous version by Meytal Bar-noy, an Israeli jeweler.

Unlike Chobot’s necklace, which appears to be solid, Bar-noy’s version is just an outline of Wonder Woman’s distinctive double W logo. As a result, it is slightly more delicate and, from far away, could easily pass as some generic geometric shape, which makes it a bit more suitable for work! The price isn’t too bad either, so this will likely be finding its way into my jewelry box soon!

Similarly subtle is Love and Madness’s new Wonder Woman wrap bracelet. While it doesn’t appear to be available through their shop just yet, the design made the rounds on social media yesterday and was very well received! The company has been teasing a number of other WW designs lately, so it appears that a capsule collection is forthcoming. 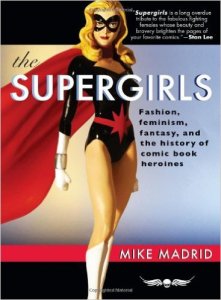 3. As I’ve mentioned a few times before, comic books are a relatively new genre for me. Unlike some of my coworkers, I was never forbidden from reading them – they just weren’t what I gravitated towards. But, since I’m trying to branch out, and now appreciate that there’s more to some of the female characters than I gave them credit for, I want to learn as much as I can about them!

To that end, I looked up Jill Lepore’s book on Amazon to see what similar titles other people had purchased and discovered Mike Madrid’s The Supergirls: Feminism, Fantasy, and the History of Comic Book Heroines. Originally released in 2009, an update was published just last Tuesday!! It looks like an absolutely fascinating read and I’m really looking forward to learning more about characters that I’ve either never heard of before or have written off as nothing more than male fantasies.

4. At my old job, we had a common kitchen that was well stocked with all sorts of bowls, plates, mugs, etc. One of the most popular items was a Wonder Woman mug that had a knack of ending up with whichever female employee needed it the most that day. While I couldn’t find that exact mug for purchase online, this one by Think Geek is a worthy substitute.

Like the jewelry featured above, the mug is simple – focusing just on Wonder Woman’s logo/costume instead of a graphic image of the character herself. And, like the original mug, I can see this version providing the perfect pick-me-up on a cold day! 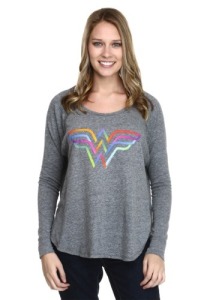 5/6. As with the first Wonder Woman mug, when the Mysterious Mr. C and I began looking at WW merchandise online, we discovered that most options had some sort of intense graphic design. Since that wasn’t quite what I was interested in, I was thrilled when I discovered this pastel long-sleeve shirt by fun.com. Like Bar-noy’s necklace, the shirt features the stylized double W logo. And though I typically prefer things to be in their original color (i.e., I HATE pink football jerseys), I really like the mixed shades in this design.

These terrycloth jogger pants by Think Geek are a little more traditional color-wise, but the ombré effect of the stars and the red accents make them more interesting than your typical loungewear.