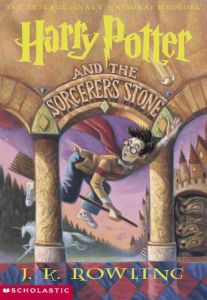 Growing up, there were certainly things that I was a fan of (Barbie and the Rockers: Out of this World is one particular example that comes to mind), but I don’t really remember joining a “fandom” until I was introduced to the wizarding world of Harry Potter.

I came to the series a few books in, but quickly got sucked into the story. I still recall waiting in line at Borders (which is really dating myself!) for the release of Harry Potter and the Goblet of Fire, embarrassing my mother as I nearly ran over an elderly gentleman at Costco because I was convinced that he too was going for Harry Potter and the Order of the Phoenix, and I fondly remember working the release party for Harry Potter and the Deathly Hallows. In fact, my Moaning Murtle costume from that night still remains one of my absolute favorites!

But despite watching all of the movies – many of them several times over – I haven’t really cracked open the covers of the books since I sped through them the first time around. So, in honor of Harry Potter and the Sorcerer’s Stone, which came out 20 years ago today, I’ve decided to revisit all seven of J.K. Rowling’s novels, and the films that they inspired. I’ll post my thoughts on the 26th of each month from now through December.

As with most of the Harry Potter stories, I remembered a decent amount of the basic plot of the Sorcerer’s Stone, from Harry’s arrival at Number Four Privet Drive, to his discovery that he is actually a wizard, to his adventures at Hogwarts, to his showdown with Professor Quirrell. Of course, there were little things that I had forgotten, but the biggest surprise was actually the first chapter.

When I began rereading the book, I was expecting an opening similar to the one in the film. Instead, there was much more detail about the Dursleys, particularly Uncle Vernon, and how the disappearance of He-Who-Must-Not-Be-Named was reflected in the Muggle world.

The other thing that surprised me was how rushed the book felt overall. Nearly one-third of its 225 pages are spent on Harry’s life before he even gets to Hogwarts. Once he’s there, he has to cross paths with nemeses Draco Malfoy and Professor Severus Snape; join the Gryffindor Quidditch team as the youngest Seeker in nearly a century; rescue Hermione Granger from a troll; hand off Hagrid’s Norwegian Ridgeback, Norbert; hunt for a wounded unicorn in the Forbidden Forest; and face off against Quirrell (and Voldemort). It’s a lot to cover, and considering how each successive volume of the series gets longer, I was surprised that this one was so trim.

Because it is so rushed, and because the quartet hunting in the forest includes Neville Longbottom, not Granger, the friendship between her, Harry, and Ron Weasley seemed a bit more forced in the book that it does in the movie. Which is too bad since it is such a critical part of the overall story. 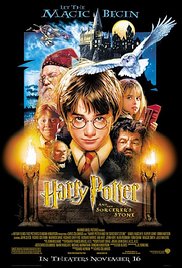 As such, I still think the film version of Harry Potter and the Sorcerer’s Stone is one of those rare instances where the movie is better than the book it’s based on. The issues with the Granger-Potter-Weasley trio are addressed, so their friendships seem much more authentic. On top of that, the cinematography really brings the wizarding world to life. Sure, the CGI for some of the creatures doesn’t hold up that well, but I dare you to watch it now and not continue to wish that you could wake up in that world instead of ours.