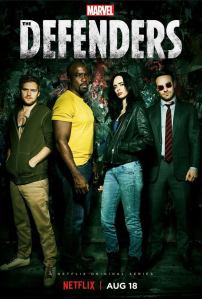 It’s safe to say that 2017 has been a tough year birthday-wise at GeekyNerdyHQ. I re-broke a toe on the morning of my name day, and not quite three weeks ago, just a few days before the Mysterious Mr. C’s, he was in a pretty nasty car accident. Luckily, he’s physically okay – just a few minor bruises from the air bag and some whiplash – but dealing with the emotional and mental fallout from such a traumatic incident, as well as the insurance companies, has been draining.

As such, we’ve spent much of the past few weekends hunkered down at home bingeing on Netflix. Two days after the crash, it was season three of Voltron: Legendary Defender. A week after that, it was the first season of Attack on Titan. And this past weekend, it was Marvel’s The Defenders.

Over two years in the making, this show focuses on the convergence of four Netflix/Marvel properties: Daredevil, Jessica Jones, Luke Cage, and Iron Fist. Yet unlike the films in Marvel’s cinematic universe, The Defenders didn’t require a massive preparatory re-watch. In fact, while C and I have seen both seasons of Daredevil and the entire first run of Luke Cage, we never actually finished the debut seasons of Jessica Jones or Iron Fist. Watching all 52 episodes of the individual series will certainly make it easier to pick up on some of the connections, but I thought the references to each character’s personal battles gave just enough information to bring you up to speed.

While the first season of The Defenders did have some trouble narratively (this breakdown by Mike Fahey and Gita Jackson at Kotaku is pretty on point), I thought it did hit the mark when it came to blending the different shows, which each have a distinct look and sound. I especially liked the opening credits of the series, which impose silhouettes of the characters over the streets of New York City, the place they all call home. With the four super-powered defenders highlighted in their own unique color schemes (Daredevil – red, Jessica Jones – blue/purple, Luke Cage – yellow, and Iron Fist – green), yet often overlapping, you got a visual sense that this was going to be a series where the characters, who don’t typically get along well with others, would have to find a way to cooperate to get the job done.

What that job was exactly remained a little murky – and fantastical, with immortal villains, undead ninjas, and dragons pushing the plot forward. But it was this same mysticism, which has been the most prevalent in Daredevil and Iron Fist, that gave the show much of its heart. Ironically, this heart predominantly came from Jessica Jones and Luke Cage constantly ribbing the other two over how ridiculous their references to the Hand and K’un Lun sounded.

In this sense, Jones and Cage often stand in for the audience, especially as far as Iron Fist/Danny Rand (Finn Jones) is concerned. Having read all of the criticism around the first season of Iron Fist and Jones’s portrayal of the billionaire ninja (my take: pretentious and petulant), it was hard not to see his scene with the bulletproof Cage (Mike Colter) in episode three – when Cage calls out Rand’s privilege – as anything but a nod to those complaints.

As for private detective Jones (Krysten Ritter), she spars the most with Daredevil/Matt Murdock (Charlie Cox), often mocking him for wearing a costume. It’s an odd-couple dynamic that plays out in just about every fight scene, but it emphasizes the fact that of the four characters, Murdock is the only one who isn’t gifted with superhuman strength. As a blind lawyer, his abilities are more sensory – though of course he’s also skilled at martial arts.

Jones herself is the one who is the least interested in a team-up, but even she eventually, if begrudgingly, joins the fight against the forces that would tear her city apart. That decision to come together may feel a bit rushed at times, but who’s to say how quickly or slowly bonds should be forged in a time of crisis.

Unlike Marvel’s Avengers cartoons, which see those superheroes living side by side and working out of Avengers Tower (also in New York City), the defenders go their separate ways once the immediate threat has been neutralized. Yet for all of the squabbling, you still walk away from the series with the sense that they will team up again, whenever the circumstances (inevitably) call for it.