It’s All Been Leading to This

Ten years ago, after watching the last credits roll on Iron Man, I saw SHIELD director Nick Fury (Samuel L. Jackson) emerge from the shadows of Tony Stark’s (Robert Downey Jr.) mansion to mention the Avengers Initiative. Six years ago, I walked out of a screening of The Avengers and thought, “Well, that was okay, but I don’t get what all the hype was about.” Last night, as Avengers: Infinity War faded to black, my mouth hung open and I literally couldn’t process what I had just seen.  END_OF_DOCUMENT_TOKEN_TO_BE_REPLACED 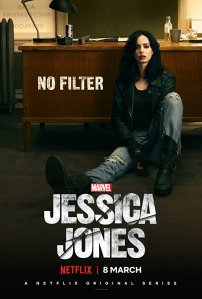 Warning: There are some major spoilers in this, so proceed at your own risk!

As I started thinking about this post and what I wanted to say, I realized two things: 1) I never ended up reviewing the first season of Marvel’s Jessica Jones, and 2) I’ve never actually reviewed the second season of a show before. The cause for the latter is predominantly because either I, the Mysterious Mr. C, or both of us will lose interest as the storylines become more repetitive or more contrived. The reason for the former is a bit more complicated.  END_OF_DOCUMENT_TOKEN_TO_BE_REPLACED

Wow. It’s been nearly a week since Spider-Man: Homecoming finally hit theaters and my thoughts about this latest film featuring the web-slinger have been on quite the roller-coaster ride.

First of all, after being somewhat skeptical of Tom Holland’s casting as Peter Parker/Spidey – as well as tired of all the reboots – I found myself really looking forward to seeing Homecoming as its release date drew closer. I can’t quite put my finger on why, but the flow of positive reviews in my Twitter feed certainly helped. END_OF_DOCUMENT_TOKEN_TO_BE_REPLACED

Captain America: Civil War smashed its way into theaters this weekend and officially kicked off the summer blockbuster season. It also took in $181.8 million dollars and marked the biggest opening weekend for a stand-alone superhero franchise film (though I use that term loosely since the movie was sort of Avengers 2.5). Fittingly, Civil War took this title from 2013’s Iron Man 3 – carrying the “war” between the Marvel behemoths beyond the screen itself.

Founded in 1934 and 1939, respectively, DC Comics and Marvel Comics have been rivals for nearly 80 years. But while that competition mostly existed in the pages of the comic books that gave them their starts, it’s increasingly showing up on the big and small screens as well.  END_OF_DOCUMENT_TOKEN_TO_BE_REPLACED